I talk a lot about books and writing in general here on my blog, but I realized that I very rarely talk about my own writing. Sometimes I’ll update you with general ideas I’m working on, but I don’t often discuss the details.

My big work-in-progress right now (and by big I just mean longest, not most important) is a fantasy novel I’m currently calling The Hero’s Guard. The idea first came to me almost three years ago in the middle of the night. I was having trouble falling asleep because I can never turn my brain off and I was off on one of those “What if…?” tangents. 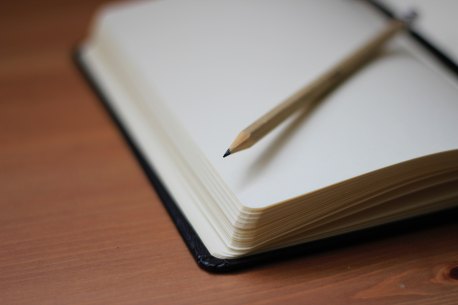 As is usually the case with my ideas, I get characters first. And I found a really compelling character named Kheris. So I rolled over in bed (again, in the middle of the night), grabbed the notebook and pen I keep on the end table, and scribbled down my initial thoughts. In the dark. Didn’t turn a light on. I still have those pages in a drawer, with larger than normal writing and overlapping words. It was a little hard to decipher it the next day, but it quickly turned into a novel-length idea.

What I quickly learned about Kheris, though, was that while she was my main character, she wasn’t the hero of the story. She was certainly important to the plot and to the story’s hero, but she wasn’t the one to save the day.

I actually struggled for a while about whether the story should be told from Kheris’ point of view or not. It’s not a first person point of view, but it’s a close third person that shows the world through Kheris’ eyes. And I didn’t know if that was the best way to go about telling the story, since she isn’t the actual hero.

In the end, I felt it was a better story from Kheris’ point of view. She knows (and hides) more information than the hero does and I find her struggles more interesting. At first I was a little wary, but I was reminded that sometimes books are told from the point of view of someone other than the hero. For example, the Sherlock Holmes stories are written from John Watson’s point of view.

Have you ever read a book where the main character wasn’t the hero? Which book was it and did you enjoy it?

2 thoughts on “Protagonist or Hero?”