Saturday, June 22 we spent most of the day on the LICC bus, traveling the roughly 8-hour (depending on road conditions) drive from Monrovia, the capital, to Ganta, a small town near Liberia’s northern border with Guinea. 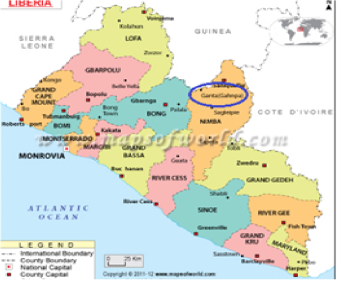 The culture shock hit me a lot harder than I expected. Here are some thoughts that went through my head as we were driving through Monrovia:

“Gina has been telling us facts about Liberia. The poverty level is so astounding! Liberia is the size of Ohio, has 4.2 billion people, and over 30 embassies in Monrovia (which means countries are taking a portion of the income, I believe. Or at least conducting business that competes with native business.). Haiti has a GPD  (I think those are the right initials….) that is 8 times higher than Liberia. (Or, put into plainer terms, Liberia is tied with Somalia as the third poorest country in the world. Sobering, isn’t it?) Driving through Monrovia is crazy! People, cars, and motorbikes are everywhere! People are selling things on the streets and out of their homes. Homes which are in terrible condition. Walls and roofs are constantly absent and there are few doors and windows. Gina said you can still see bullet holes from the civil war, which ended about 9 years ago. Abandoned buildings are subdivided and filled to bursting with people.”

I added the parts in parenthesis based on knowledge gained later in the trip. As we left Monrovia and began driving through the countryside, it only got worse. It was pretty eye-opening experience. Seeing kids running around half or completely naked because they had no choice, watching women wash clothes in muddy rivers, and seeing the meager products for sale by the side of the road was a truly humbling reminder of how blessed I am. This trip really taught me to be grateful for and aware of what I have.