“Diamonds and Toads”, or “Les Fées” (The Fairies) as it was originally titled in French, was written by Charles Perrault and included in Andrew Lang’s translation of Perrault’s stories called The Blue Fairy Book (1889). You can find the text for free online, though, if you’re interested in reading it.

The story follows a mother and her two daughters. The older daughter is just like her mother: proud and rude. The younger daughter is their exact opposite as she is beautiful, kind, and generous. Their mother favors the older daughter and the younger is made to do all the chores and housework. One of her tasks is to go to the well twice a day and draw water.

One day, while at the well, the younger daughter meets a beggar woman who asks her for a drink. The kind daughter gladly draws her a drink and the beggar woman reveals she is a fairy in disguise. To reward the daughter’s kindness, the fairy gives her a gift: every time the girl speaks, a flower or precious jewel will fall from her mouth. 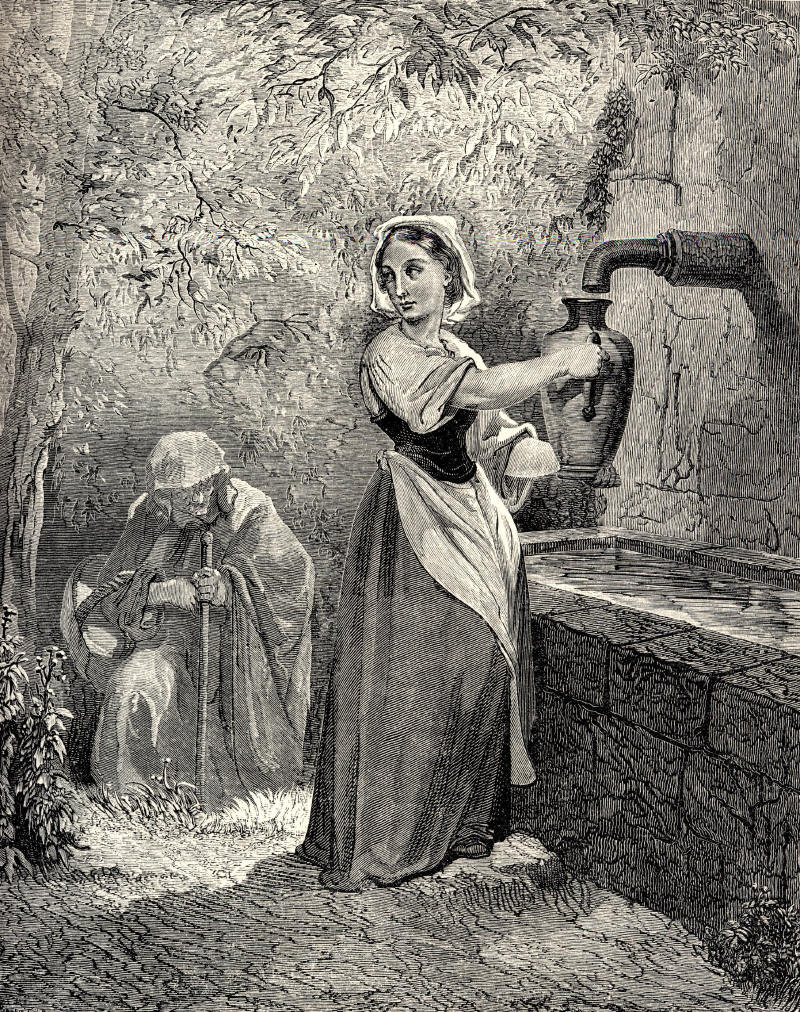 The girl returns home only to be scolded by her mother for taking too long. When she tries to explain why she’s late, flowers and jewels begin to fall from her mouth. This, of course, intrigues the mother, who gets the full story from her younger daughter (as well as more flowers and jewels). Rather than be grateful for such a gift, the mother gets jealous and greedy. She decides that her older daughter should be the one to have such a gift. So she sends her older daughter (most translations I’ve seen call her Fanny) to the well, instructing her to give a drink to anyone who asks.

Fanny mopes and complains on her way to the well (with their best silver pitcher) and meets a grand lady, who asks for a drink. While Fanny does as she asks, she also complains and insults the lady while she’s at it. Of course, the lady is the fairy, once again in disguise. She sees Fanny’s true nature for what it is: greedy and cruel. So instead of giving her a gift like her younger sister’s, the fairy curses Fanny. Every time Fanny speaks, a toad or snake will fall from her mouth. She returns home and her mother is understandably freaked out (and also angry) at what’s happening.

Now, you’d think that the mother would be nicer to the younger daughter, since she’s the one who could make them all rich. Instead, the mother blames the poor young girl for somehow sabotaging her older sister. The mother chases her young daughter from home. But as is often the case with the beautiful, kind girls in fairy tales, she was found by a young prince who, touched by her beauty and kindness, fell in love with her and decided to marry her.

The older daughter stayed at home until her mother couldn’t stand the toads and snakes anymore and she too was driven from home. Unlike her younger sister, she found no one sympathetic to her plight and died alone in the forest.

Charles Perrault wrote this original tale, but drew on other stories like the Grimm Brothers’ Frau Holle. However, he was concerned that the premise (a mother favoring her daughter over her stepdaughter) was too similar to his famous story Cinderella. So he made the two girls full sisters.

Fairy tales can be sorted into many different types. One such system is the Aarne-Thompson-Uther system. In the ATU system, Diamonds and Toads falls in the category 480, the kind and unkind girls.

I’ve actually never seen adaptations of this story (or I didn’t until I did the research for this post). However, Gail Carson Levine (a fantastic author who’s written all sorts of fairy tale adaptations) has written a story based on Diamonds and Toads that looks utterly fantastic! It’s called The Fairy’s Mistake and it’s about how, while the fairy blessed and cursed the girls correctly, their lives afterwards aren’t quite the typical happily-ever-after. I’m definitely putting it on my to-read list!

Have any of you read this fairy tale before? What did you think of it?

One thought on “Fairy Tale Facts: Diamonds and Toads”