This month on my Myth or Magic series, we’re talking about a pretty interesting (and possibly a little scientific) question.

“Why doesn’t Rapunzel ever climb down her own hair and escape out of the tower?” -Kat

Well, Kat, thanks for the question! I explored three possible things keeping Rapunzel in her tower and I think I’ve landed on the most likely one.

As always, I’m going by the original fairy tale, not a Disney or other adaptation. So let me pull out my 682 page Grimm compilation and point a few things out.

Now, I’ll be the first to admit that science is not my area of expertise, but I’m pretty it was possible for Rapunzel to use her hair to get herself down.

According to the translation I have, Rapunzel wound her hair around a hook above a window and the enchantress climbed up. I don’t know about you, but that sounds incredibly painful, and if I were Rapunzel, I’d be holding as much of my hair as possible to keep it from pulling on my head, distributing the pressure.

If Rapunzel wanted to leave her tower, she’d have two choices. Tie one end of her hair to something sturdy (which would mean cutting her hair once she got to the bottom) or looping her hair over the hook and rappelling down, using the hook like a pulley. I can see how the latter option would possibly be too painful (or scary, maybe Rapunzel has a fear of heights). And maybe there wasn’t anything to tie her hair around.

But the story does tell us something Rapunzel says: “I do not know how to get down.”

Rapunzel is, of course, being held by an enchantress (or a witch, depending on the translation you read). So it wouldn’t surprise me if she had some sort of precaution set up to keep Rapunzel from escaping.

But once she meets the prince, she agrees to run away with him and they come up with a pretty viable plan. True, we never get to see them try the plan (the prince brings Rapunzel skeins of silk when he visits and she begins to weave a ladder), but nothing seems to indicate that their plan would fail.

If I had to give a one word answer to this question, psychology would be it. Rapunzel was taken from her real parents as a newborn and was shut in the tower at age 12. I find that important. At 12, she would have been old enough to question the witch’s reasoning and understand whatever the witch came up with. (And I know I said I would use Disney, but in Tangled it’s made very clear to Rapunzel that it’s for her own safety, which seems to justify the drastic measures.)

We also need to take into account that all of Rapunzel’s information comes through the enchantress. If I were holding someone captive in a tower (and I’ve never considered it before, I promise), I wouldn’t tell them anything about the outside world. I’d keep them ignorant and dependent on me. And now I want to stop thinking about this. It’s creepy.

And then we get to one of the most revealing lines of the story. When the prince asks Rapunzel to marry him, she immediately thinks, “He will love me more than old Dame Gothel does.”

To me, that indicates some serious manipulation on the witch’s part. Rapunzel only considers leaving when she has someone else to depend on, someone else to take care of her. 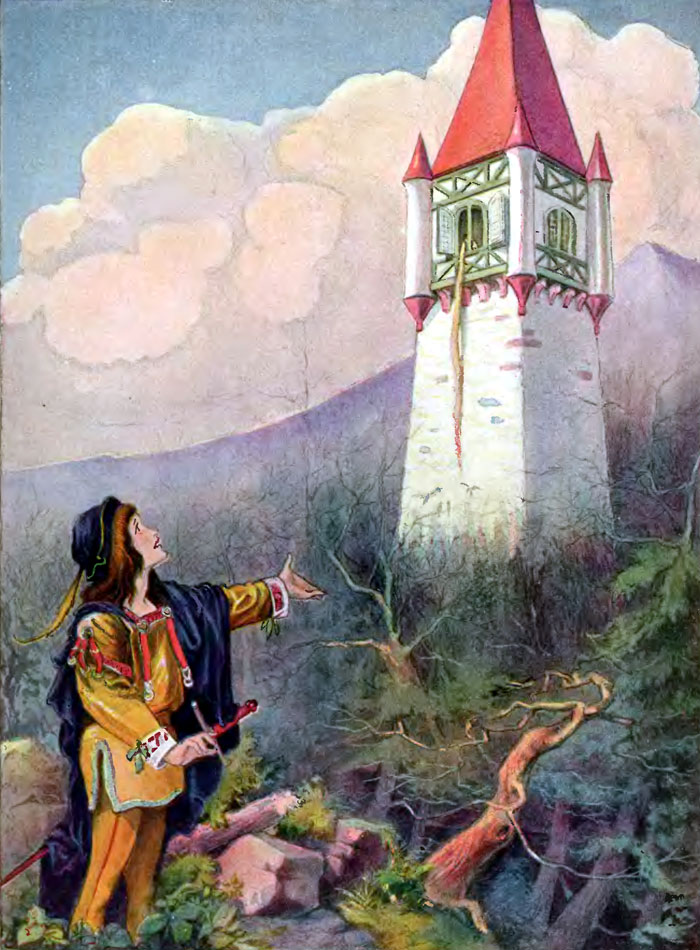 So, in my opinion, the reason Rapunzel never leaves is because she’s been psychologically manipulated by her captor.

What do you guys think? Am I right? Did I overlook something? Let me know!

And if you have your own fairy tale related questions you want me to answer, leave a comment below! I’ll do another Myth or Magic post next month! If you’re curious about what other questions I’ve answered, you can check out my post about the Little Mermaid’s communication problems.

3 thoughts on “Myth or Magic: Locked in a Tower”